Some of you may be familiar with the Kawasaki Versys Forum. This Internet forum has existed for 11 years and numerous meetings are organized every year. So almost 12,000 members want to experience something together from time to time. Just like recently in Oybin in Eastern Saxony, where the annual meeting of the forum took place this year. We were also there - besides interesting conversations and a big trip we could introduce ourselves and showed what our dguard can do. In addition, a raffle was organized, to which we were happy to contribute prizes. We are very happy that the proceeds this year went to Kinderarche Sachsen e.V..
Andreas Stevens is co-organizer of the meeting and an enthusiastic dguard user. The long journey from the westernmost tip of Germany to the easternmost tip was no problem for him, because he often drives long tours and is always on the road with the dguard. He always wanted to ride a motorbike, he thought it was too expensive at first. But instead of buying a boat, he got his motorcycle license and bought his first motorcycle - a Suzuki Intruder.
Andreas attaches great importance to safety, as does his mother, who is worried when he is alone and on remote roads. That's why he had the dguard installed in his Versys 650 after meeting it at various trade fairs. If you also want to know more about the automatic emergency call system, come to our stand at Intermot - from 02. to 07.10. in Cologne. We are happy! 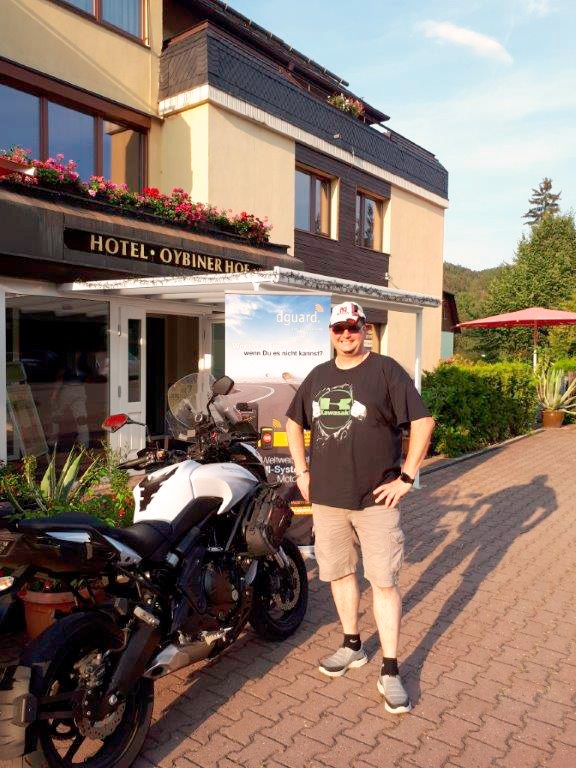